10 Things You Should Never Buy Your Pet Chinchilla

10 Things You Should Never Buy Your Pet Chinchilla

Owning a chinchilla is a joy, but these delicate pets need to be cared for properly to ensure a long and happy life (they have a life expectancy of 20+ years!). There’s a lot of misinformation out there about caring for pets, much of it perpetrated by pet supply companies marketing food, toys, and other items for chinchillas that are extremely unhealthy or dangerous for them. So if you’re a new chinchilla pet owner or considering adding a chin to your family, check out these 10 items you should never buy for your pet chinchilla. 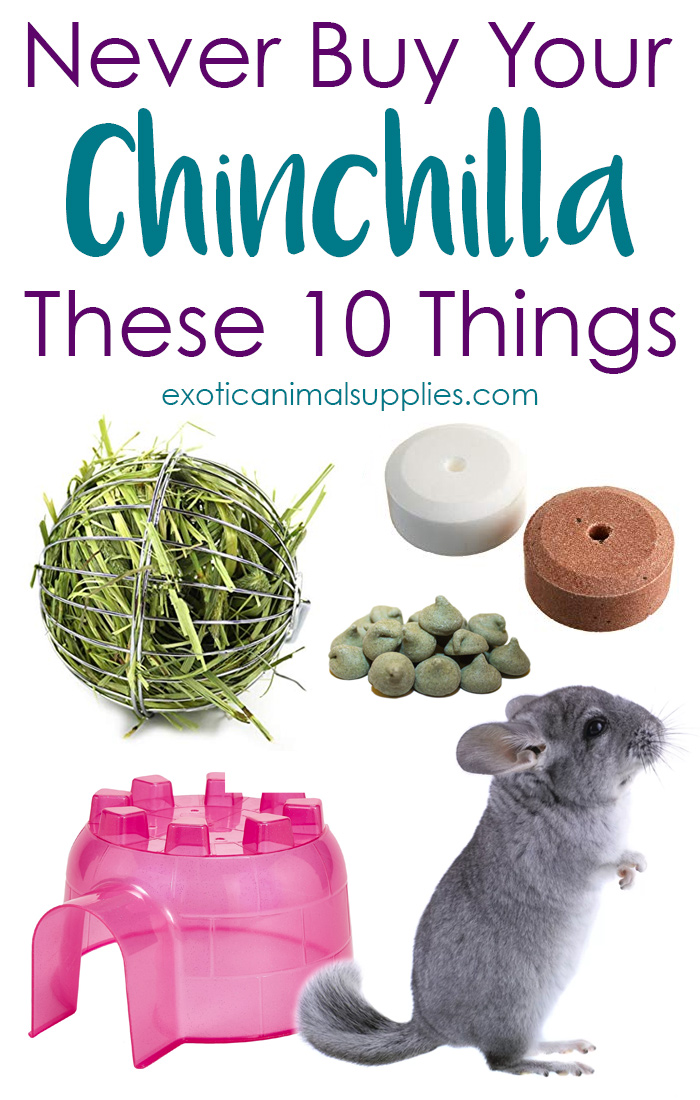 Frequently I see new chinchilla owners online squeeing about how much their chinnie loves raisins. And that’s true, chinchillas absolutely love raisins. It’s basically like giving a kid candy–and raisins are as healthy for chinchillas as candy is. Why are raisins bad for chinchillas? They aren’t toxic, but the high sugar content is the issue. Chinchillas do not eat fruit in their natural diet, so their bodies have not evolved to process the sugar properly. Over time, eating raisins and other fruit can cause health issues like obesity and diabetes.

Instead, it’s better to give your chinchilla healthy treats like oats, rosehips, Cheerios, or shredded wheat. 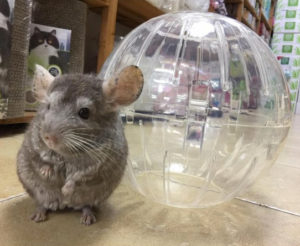 Exercise balls are commonly used by rodent owners to give their small pets some exercise to run freely around the house. While they seem like a fun and cute way for your chin to exercise, they are extremely dangerous for chinchillas. There are several reasons these balls are bad for chinchillas.

Many owners call them “death balls” because a chinchilla can easily overheat inside of one. Since chins are temperature sensitive, overheating can quickly become fatal. These plastic exercise balls are also too small for chinchillas, which can cause injury to their spine while running. Also, these balls are usually designed with ventilation slits, which are just wide enough for tiny chinchilla toes to get caught in and cause injury. The final flaw, while not fatal, is just gross. Chinchillas will often pee and poop inside an exercise ball, which means the waste will get in their fur while running. Overall, exercise balls are a big NO when it comes to chinchillas.

If you want to give your chinchilla more opportunities for exercise, instead consider getting a chinchilla safe exercise wheel for their cage or giving them playtime in a chinchilla proofed room or a playpen

Like other rodents, chinchilla’s teeth are constantly growing, which means they need to frequently chew to keep them worn down. Chewing is a natural behavior that should be encouraged with safe wood toys and accessories. The pet store has other ideas, with shelves filled with plastic toys and accessories.

Plastic is extremely dangerous for chinchillas because when they chew on it they can swallow small pieces of it. Their bodies cannot process the plastic, which can cause blockages in their digestive system. These blockages can lead to discomfort, illness, and even death.

Make sure to replace any plastic shelves with wood or metal shelves and provide plenty of wooden chew toys for your chinchilla.

Salt and mineral wheels are regularly sold in the small pet section of the pet store and advertised for all kinds of pets. Chinchillas just don’t need them. If you’re feeding them a proper chinchilla pellet food, then they have all the salt and minerals they need in their diet. Buying a salt wheel is just a waste of money and excess salt in their diet can cause health issues in chinchillas.

Humans need variety in their diets, chinchillas do not. While the bright food mixes you see on the pet store shelf look appealing, they are TERRIBLE for chinchillas. Feeding a chin a food mix is like putting vegetables on a toddler’s plate and then dumping candy on top. The kid will eat the candy and ignore the nutritious food. In fact, if you ask most chinchilla owners who feed their pet a mix, they will mention that their chin only eats the seeds, dried fruit, and other treats and leaves the pellets behind. These food mixes can lead to health issues, weight gain, and shortened lifespan.

A chinchilla should only be fed an alfalfa based pellet. Oxbow and Mazuri are the best brands and can easily be bought online or at many pet store chains. 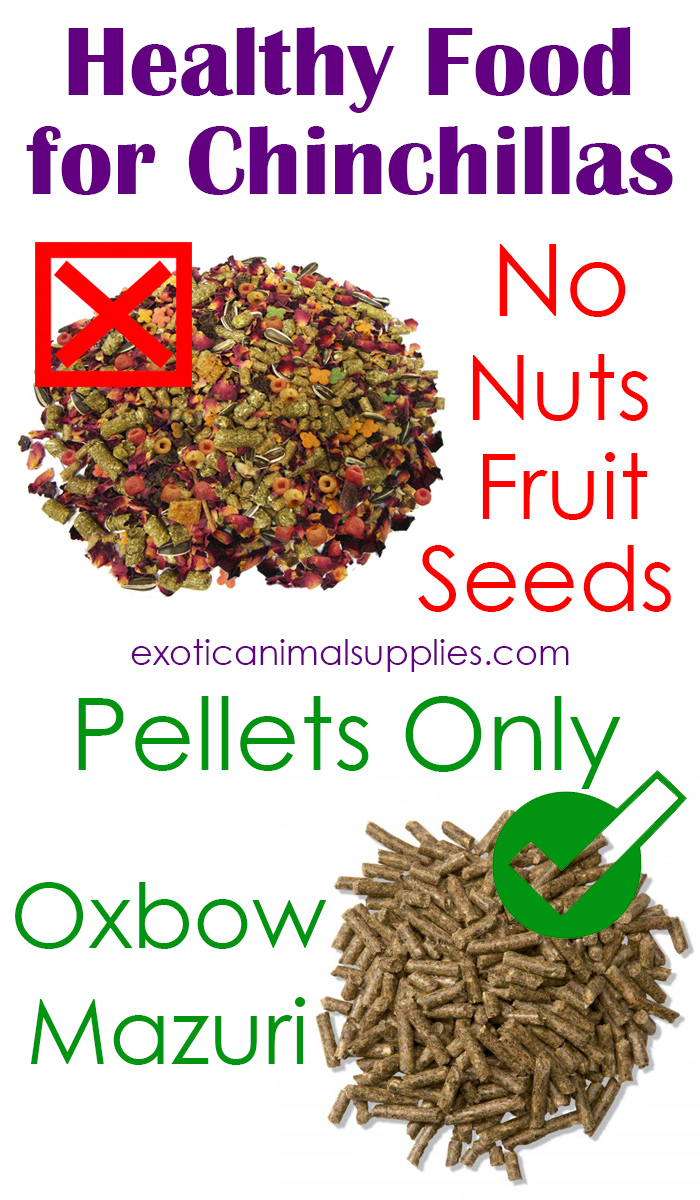 Okay, so we know plastic is bad for the chinnies, but that doesn’t mean you can just pick up any old wood toy at Petsmart and give it to your chinchilla. While there’s plenty of safe wood for chinchillas, there is also wood that is toxic. Some small pet toys may use treated or painted wood, which is also unsafe for chinchillas.

When it comes to shopping for your chinchilla, err on the side of caution. Avoid any toys that don’t state the type of wood used, whether it’s treated, or if there are toxic adhesives or paints used in the production. To stay on the safe side, buy toys online from chinchilla rescues or savvy entrepreneurs. You can also make your own toys from safe woods. 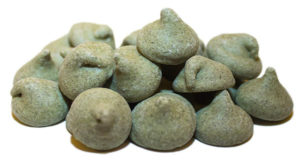 This is another case of pet store gone bad. Yogurt drops are a very popular treat advertised for small pets, but they are absolutely horrible for chinchillas. They look like white or green chocolate chips and they have a ton of sugar in them, which we’ve already learned is terrible for chinchillas.

Instead, check out these healthy chinchilla treat options. 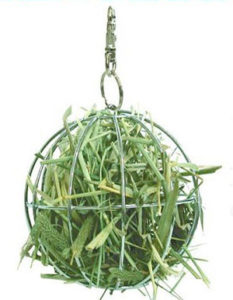 What looks like a fun way to provide your chinchilla with fresh hay is actually an injury waiting to happen. Since chinchillas are quite bouncy, it is incredibly common for them to jump on top of these wire hay balls. If a chinchilla gets an arm or leg caught in the ball, they can break it or otherwise injure themselves. They can also get their heads stuck in them, which can be deadly. It’s better to be safe and not buy one.

Instead, you can use a hay rack to provide your chinchilla with fresh hay in their cage. 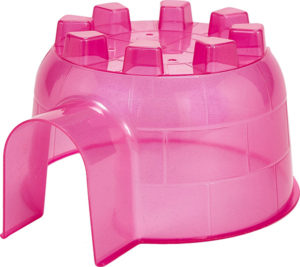 Plastic igloos are incredibly popular at pet stores for all kinds of small pets. When it comes to chinchillas, they’re a bad idea. While you should provide your chinchilla with a house or hideout, a plastic one is a bad idea. Your chinchilla will inevitably chew on their house and ingesting plastic can be deadly. Instead, get a metal or wood house for your chin to sleep in. 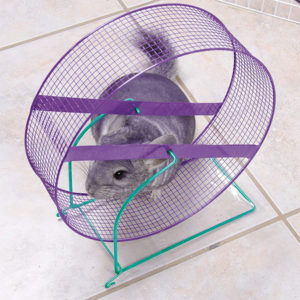 While a chinchilla wheel is a great way to let your pet get extra exercise in their cage, wire chinchilla wheels are incredibly dangerous. They’re often way too small for a chinchilla to use safely (the one pictured only has a diameter of 11″) and the wire mesh creates opportunities for a chin to get a foot or toe stuck and injure themselves.

Look for safe chinchilla wheels with solid running surfaces and a diameter of 15″ or larger.

Use this chinchilla new owner checklist to see all the things you should buy for your pet.